(Disclaimer: This post does not contain spoilers for Black Panther but does for all previous MCU movies.)

The newest instalment in the Marvel Cinematic Universe dropped today in the form of Black Panther and earlier today I got the opportunity to see it. Predicting a $165 million opening weekend, just missing the mark of $180 million set by Captain America: Civil War in 2016, Black Panther stars Chadwick Boseman (Get On Up, 42), Michael B. Jordan (Creed, Fantastic 4), Lupita Nyong’o (Star Wars: The Force Awakens, 12 Years A Slave), Danai Gurira (The WalkingDead, The Visitor), and Martin Freeman (The Hobbit: An Unexpected Journey, Sherlock) and is directed Ryan Coogler (Creed, Fruitville Station). Black Panther will be released worldwide on February 16th, 2018.

First of all, the casting for this film, as with the greater MCU was flawless. Cast by Sarah Finn, Black Panther provides us with a great mix of new and well-known talent including everyone from Forest Whitaker (Rogue One: A Star Wars Story, The Last King of Scotland) to Letitia Wright (The Commuter, Black Mirror), each and every actor perfect for their role.

Secondly, the acting was great all-round making stand-out stars of Michael B. Jordan (above top left), Andy Serkis (below right), and Letitia Wright (above bottom right). While Forest Whitaker’s and Angela Bassett’s performance was expectedly good, they took surprisingly small roles that could have been better expanded upon. Daniel Kayuula (Get Out, Sicario) delivered an above-average performance, Lupita Nyong’o (above middle) and Danai Gurira (above top right) were great and Chadwick Boseman (above centre) and Martin Freeman (below left) were a little underwhelming.

Directed by Ryan Coogler and jointly written by Coogler and Joe Robert Cole (Amber Lake, American Crime Story), Black Panther is very well directed with only a few awkward slips that are barely worth mentioning. The screenplay, however, is a little lacking. Much of the humour, as with many of the MCU movies, fell flat and Shuri’s character (below) was badly written. Obviously intended to be relatable to the younger audience, it is obviously written by two 30-somethings attempting to write a younger character (not to mention an unbelievably cringy ‘what are those’ joke). The character, though, is interesting and layered and could be further developed in the next MCU movies, provided the right writers are put in charge (though with Christopher Marcus and Stephen McFeely in charge, I am sceptical). 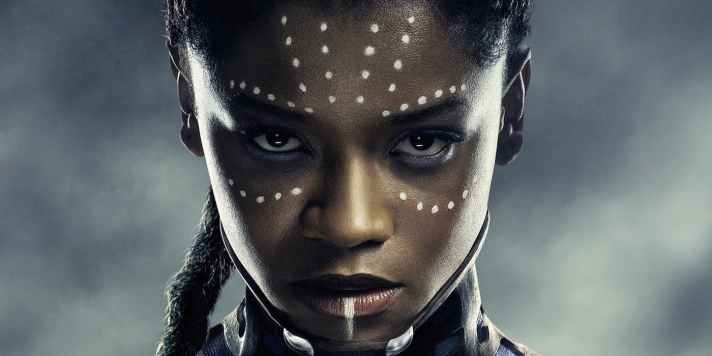 The story, however, is much better than the MCU stories we have had in the past and is full of actual surprises – something often lacking from modern blockbusters. I would not, however, say it is entirely unpredictable as it still takes the form of the 18 previous MCU films and the ending is underwhelming and predictable. Also, most of the characters are interesting and well-written, especially Michael B. Jorbon’s Killmonger and Danai Gurira’s Okoye. There are also a couple of plot holes and issues but I will wait for a second watch and worldwide release before publishing these.

Though the cinematography (this time headed by Rachel Morrison), as with all Marvel movies, is not worth mentioning as it is just average and fairly dull, the criticism of Marvel’s colour-scheming that arose post-Captain America: Civil War has obviously been taken into account as it was improved massively in the film (as it was in Guardians of the Galaxy: Volume 2). The editing (done by Debbie Berman and Michael P Shawver), unsurprisingly, was also up to scratch. With not a single noticeable slip-up, Berman and Shawver deliver the next in a well-edited (though not spectacularly so) franchise.

Finally, the music, composed by Ludwig Göransson (Creed, Get Out) with a companion album by Kendrick Lamar, was good but nothing particularly worth talking about. Some of the music was a little uncomfortable and stuck out but this was compensated by some of the best original-score fight scene music in the MCU to date. I also think that Kendrick Lamar’s music was a little underused as it could have been amazing if edited to fit some of the more intense scenes. Instead, it was awkwardly thumbed in and not very well edited into the action (though that is partially down to the sound department).

I can only imagine how difficult it must be to keep each MCU movie conforming with the universe and, though Black Panther is largely separate from the wider MCU happenings as a whole, what tie-ins it does involve, are handled well and cause no disturbances, timeline related or otherwise.

In summary, I enjoyed the movie greatly and, though there were some cringe-worthy moments and it was a little artistically lacking, it is one of the best Marvel movies to date (also, the Stan Lee cameo is one of the better ones so far)

I hope you liked this post, be sure to let me know what you think in the comments. Also, be sure to check out my spoiler-free review of Isle Of Dogs and my article for what the events of Black Panther mean for the MCU.